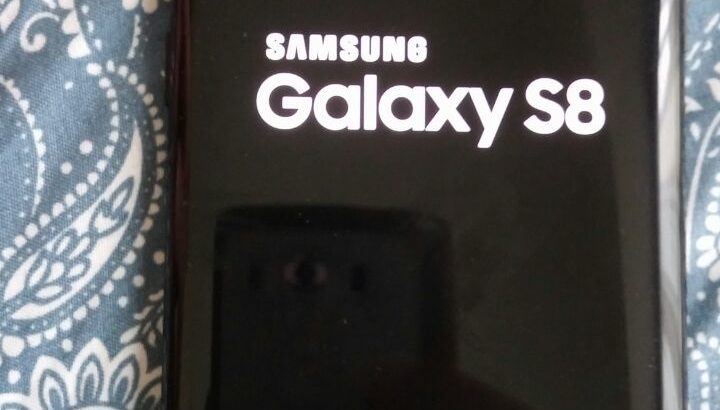 One afternoon, I was playing an “action” game on my Samsung Galaxy S8 when the phone suddenly froze — no button responded to my presses, whether it’s a soft button or hard button, with the motionless screen of my game still on display. After a few seconds, the phone turned off. I noticed that my phone was very HOT! I thought maybe I zeroed out its battery so I tried charging it… nope, it wasn’t charging. I thought maybe the battery is really exhausted and that after 5-10 minutes there would be an indicator of it charging, but nope. I kept on trying to charge it but no luck so I called it a night and left the Samsung Galaxy S8 to rest in my drawer, while switching to my extra phone — an LG G3 which still works fine but is very slow and the camera can’t compare to that of Samsung Galaxy S8. Still, I’m glad I kept it.

The next day I tried plugging it in and it finally began charging again! The LED light was on and it had a charging indicator.

Later, I turned it on. It prompted me for my lock pattern so I thought I was gonna be able to use my phone again. But each time I enter the correct pattern, the Samsung Galaxy S8 would restart and prompt me for the pattern again. It went on like that so many times.

First thing I tried to do was to clear the phone’s cache via Recovery Mode. Then I chose “Reboot”.

After rebooting, my phone automatically entered Recovery Mode again. I thought “ugh it must have not worked because this feels like a loop again”.

Desperate, I did a data wipeout. As I thought, I was in another boot loop. Each time I reboot from Recovery Mode, my phone just automatically re-enters Recovery Mode again.

Rebooting my Samsung Galaxy S8 from Recovery Mode triggers the loop, but “Power Off” works as long as the phone is not plugged to a charger. I also noticed that while the Samsung Galaxy S8 was powered off, when I plug it to a charger, it automatically turns on. I have no idea why that happened.

Anyway, that was the time when I knew I had to take my Samsung Galaxy S8 to the service center. I was ready to try flashing the “bricked” Samsung Galaxy S8 but I wasn’t able to obtain a copy of the firmware, so yeah, I had no choice but to as professional help.

By the way, te Recovery Mode screen showed error messages at bottom, like so: 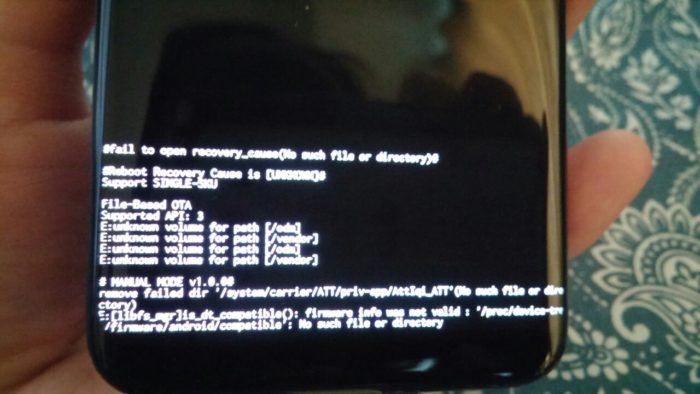 First I went to a guy in a nearby mall who does phone and laptop repairs instead of a Samsung Service Center; my Samsung Galaxy S8’s warranty had already expired anyway. The repairman refused to work on it. He said that if he fails to fix it by flashing the firmware, I’ll have to bring it to the Samsung Service Center, who in turn might refuse to service it because a third party already attempted to flash it. Well, thanks to him for being considerate instead of attempting to fix it and charge us for it.

Come weekend, me and my hubby went to SM Megamall to watch Spider-Man: Far From Home with friends (nice movie, by the way, except the villain reveal part). But before and after the movie we had gone back and forth the Samsung Service Center in there. I think it’s also called the “Samsung Flagship Store SM Megamall”.

In the Samsung Service Center there is a kiosk that prints a queue number, which could be for Inquiry, Repair, Claim, and another item whose name I forgot because I never used it on my visit. xD

We had a “Repair” queue number and during our turn, the staff assigned to us said that they will attempt to flash the firmware. If that worked they would charge me P700, otherwise they won’t but will advise motherboard replacement to fix my sick baby Samsung Galaxy S8 which will cost me P12,000. OH NOOOOO… I was still hopeful that a flash was all it needed. On a side note, I liked that all the staff we encountered there at the Samsung Service Center were easy to talk to and not intimidating in any way.

After 1 hour we returned (got a “Claim” type of queue number) and were told that the firmware flash did not work and the motherboard had to be replaced.

Buying a new phone is the common decision of users when the phone needs repair that costs over P10,000. But for important reasons, I had to stick with my Samsung Galaxy S8 and had no choice but to have the motherboard replaced. What important reasons? I did not NEED an S9 or S10. I was still happy with my S8, if only it hadn’t become a pretty little BRICK. For a moment I had considered buying a new Samsung phone that costs around P15,000 but we found out that it’s NOT WATERPROOF and that nowadays, only flagship phones are released as waterproof by Samsung. The hubby advised that if I wanted a phone whose specs and camera are at par with the Samsung flagship phones, I should buy Huawei or Xiaomi phone… but buying a phone from these companies is not an option because as much as possible I wish to NOT support Chinese brands. And… err, I am just really attached to Samsung phones! 😊 That left me with fewer choices, which are: buy an S9, buy an S10, or revive my Samsung Galaxy S8. I chose the last option because it’s still waaaaay cheaper than buying S9 or S10 which I don’t really want anyway! After all, there’s something I’ve been saving up for. Nah, I ain’t telling you what. 🤣

With that decision we took another queue number for “Repair”. I felt the energy leave my body when the staff told me the total cost would be P15,300. The additional costs came from the “tape” to be used to retain waterproofing on my beloved waterproof phone, and the service charge. I stuck with my decision and pushed through with the motherboard replacement. When I met up with our friends again I was totally in a bad mood but I tried my best to act normal; I hope they didn’t mind my slight grumpiness.

The staff told me they’ll call when the phone repair is done and ready for pickup, or when something aside from motherboard replacement need be done to make the Galaxy S8 work again. After watching Spider-Man: Far From Home, they hadn’t called yet. I realized I didn’t ask if it should be done on the same day. 😅 We went back to the Samsung Service Center to ask what time was the expected repair completion. It was around 4:30PM then. The staff said we can come back to claim my phone by 7PM. W00t!

Me, the hubby, and our friends first went to Ramen Nagi for early dinner in The Podium… only to find out that the Ramen Nagi we were expecting is now just an “under construction” wall. 🤣🤣🤣 But my friends’ craving for that bagoong flavored ramen at Ramen Nagi was strong enough to make us walk to Robinsons Galleria! Another side note: I usually have adventurous taste buds but at Ramen Nagi, I was the only one in our table who disliked the bagoong ramen and the basil & cheese ramen! Ugh. Sorry, Ramen Nagi. I really loved the basic “butao” ramen tho.

At 7PM our pals said goodbye, while me and the hubby walked back to SM Megamall to get my phone. We like walking, yeah.

For the last time we took a queue number at the Samsung Service Center, a “claim” number. The staff powered my Samsung Galaxy S8 on, and my eyes lit up when I finally saw my phone boot up the Android OS again 😂She demonstrated various functionalities of the newly revived phone such as color display, screen rotation, sounds, among others, to show that it’s working. I paid for the repair right there, with the staff who handed the phone over to me. Thanks for accepting debit cards! Otherwise I would have had to run to find an ATM machine outside and then run back to the service center again.

Why does this happen?

The Samsung Service Center staff could not give us a satisfactory answer, but it’s not a big deal to me because I understand how we can’t provide accurate reasons for failure of software/hardware some times. If they were running a profiler on my phone while I was playing that “action” game (I’m not saying what game because I suck at it even though I LOVE playing it) before it broke, then they should be able to pinpoint what went wrong, but no. In case you’re curious about what the staff said, she said that it’s possibly because I downloaded an update for my system, which didn’t finish. But I didn’t do any system update before that game session so it doesn’t make sense to me. 🤔